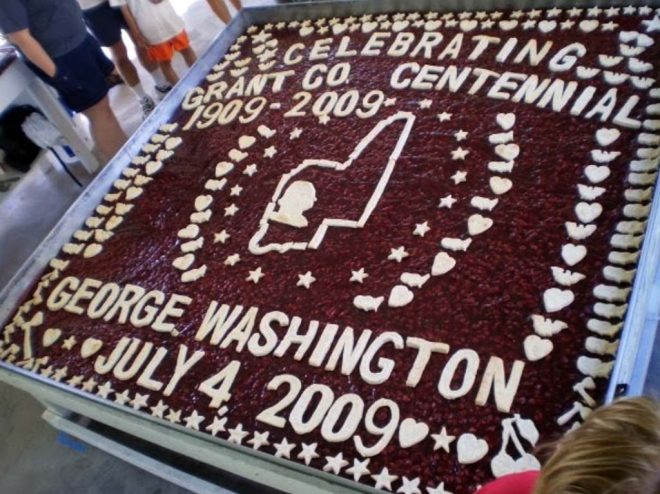 We’ve been hunkered down for nearly two months now, waiting out the pandemic. For those of us who love to travel, we’re limited to books or videos to quench that thirst. That’s why I’m sharing my recent HistoryLink story about the town of George, Washington.

Many of us have passed through George on our way to a concert at the Gorge Amphitheatre, about six miles away. But George has two other claims to fame: It is the only town in the country to bear the full name of a U.S. President, and its popular Fourth of July celebration features the world’s largest cherry pie, weighing in at one half-ton. In case you want to duplicate the recipe at home, you’ll need 150 pounds of flour, 72 pounds of shortening, 100 gallons of cherries, 200 pounds of sugar, and 75 cups of tapioca. Once baked, the pie weighs a staggering 1200 pounds and can feed 1500 people.

George, Wash., was built by a pharmacist called Charlie Brown, who lived in nearly Quincy in the mid-1950s. Brown and two business associates placed the winning — and only — bid of $100,000 on 339 desolate acres in a land auction run by the Bureau of Land Reclamation. As luck would have it, his two friends moved out of town before the bids were opened and Brown ended up being the solo owner. He laid waterlines, platted streets, sold pie-shaped lots and built the Martha Inn.

Want to know more about George? You can read more here.