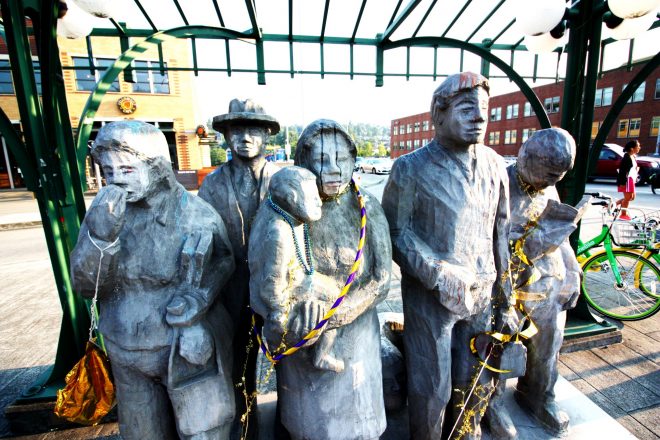 My editor at HistoryLink asked me to write a thumbnail history of a town in north central Washington that I had never heard of before — Pateros. For a small town of 700, it had a long and at times traumatic history. Founded in 1885, the quiet community was known for fruit orchards and cattle ranches, until its history was changed first by water, and then by fire.

In the 1960s, when the Wells Dam opened, the town was submerged beneath the Columbia River. The U.S. Army Corps of Engineers moved some buildings, but most were lost. Then in 2014, the massive Carlton Complex fire swept through the region, leveling entire city blocks, leaving behind a blackened landscape and a changed community.

While researching the story, I came across a quote in The Wenatchee World from Pateros resident Richard Beyer, who decried the “styleless architecture” of the town post-flood. Turns out that Beyer knew something about style and form, since he’s the American sculptor who created the iconic “People Waiting for the Interurban” statue in Fremont.

Two stories I wrote about Beyer and his art just appeared on HistoryLink. Check them out here — Beyer’s life and how “People Waiting for the Interurban” got its start.