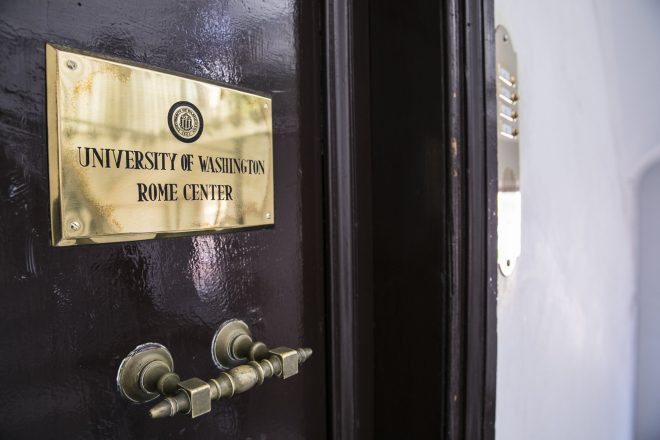 In April, I met friends for a late lunch on the Campo de’ Fiori in Rome. The street vendors were packing up, the market stalls were emptying, and the tourists were out in force enjoying the warm sunny temperatures.

I was intrigued to find out that the University of Washington opened its Rome Center 50 years ago, not far from the Campo de’ Fiori. When I returned to my Seattle office, I did a bit more research about the building’s provenance. My feature story appeared this summer in L’Italo Americano.

UW students lucky enough to spend a semester abroad attend classes  in the beautiful Palazzo Pio. The distinctive building sits on the ruins of the Temple of Venus which once crowned a theater complex founded by Pompey the Great. It was here that Julius Caesar was assassinated in 44 B.C.

During the Middle Ages, the Orsini family occupied the house. When the Campo de’ Fiori became a center of high culture, the Orsinis asked architect Camillo Arcucci to upgrade the building. Arcucci selected the distinctive baroque facade that adorns the palazzo today.

The house was later acquired by the Pio da Carpi di Savoia family and was renamed Palazzo Pio. In the mid-1800s, the palazzo was sold to a banker who in turn passed it on to the current owners, Instituto Tata Giovanni, an ecclesiastical organization that serves orphaned boys. The UW program moved into the building in 1970, thanks to the efforts of architecture professor Astra Zarina.

In January 2019, the UW began a multi-year improvement project to bring new lighting, flooring, technology and other enhancements to the centuries-old building. Student exhibits, lectures and other activities marking the 50th anniversary will be held in both Rome and Seattle throughout 2020. Now that you know a bit more about the history of Palazzo Pio, check it out next time you’re in Rome!