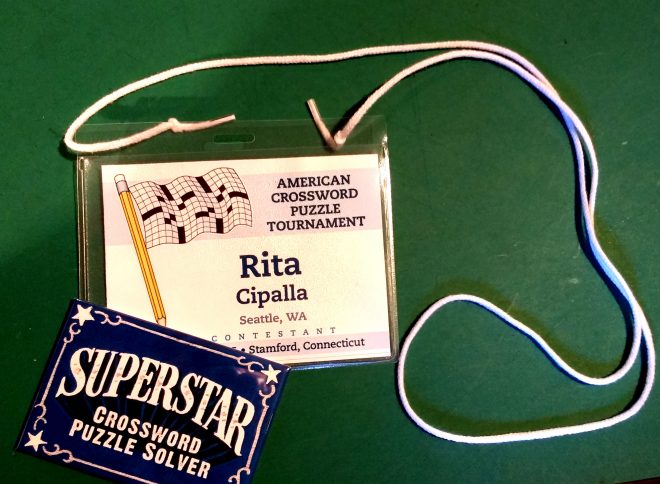 Posted on August 10, 2020 by Rita Cipalla Posted in Art and culture

Yes, you read that right. Lollapuzzoola is this weekend and I’ll be participating for the first time.

This crossword puzzle tournament was founded in 2008 by Brian Cimmet and Ryan Hecht and takes place each summer in New York City. It’s the second-largest crossword puzzle tourney in the country, and I just signed up for the six-hour (gulp!) contest, to be held online this Saturday, August 15.

I’ve been a crossword puzzle fanatic since I was a child. No wonder I entered a career field where words are king. For three years, I participated in the granddaddy of them all — the New York Times Crossword Puzzle Competition. Who wouldn’t want a chance to meet legendary puzzle editor Will Shortz in person?

If you want to see how a crossword tournament can actually be a source of nail-biting, edge-of-your-seat excitement, take a look at the 2006 indie film “WordPlay.” This film documents the New York Times competition and its champions.

This year, because of the pandemic, the New York Times tournament was canceled. Into the void stepped Lollapuzzoola which opted for a virtual format.

So I’m busy sharpening my pencils, metaphorically. Now … what is a 5-letter word for current events*?