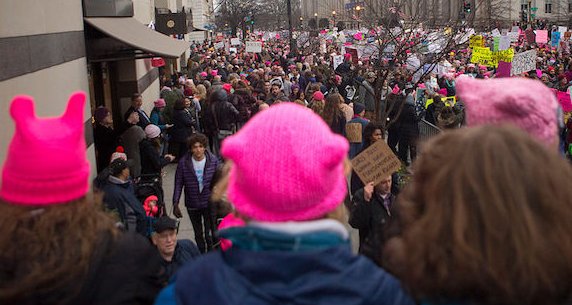 Nearly three years ago, Seattle held the largest political march in its history. On January 21, 2017, more than 100,000 people took to the streets in a nationally coordinated day of protest. The Womxn’s March has been held in Seattle every year since.

One of the defining images of the march was the hot pink cat-eared knit caps known as pussyhats. The Pussyhat Project was started by two California women who wanted to create a sea of pink hats along the march route. Their idea turned into a powerful visual statement of focus and solidarity.

Besides Seattle, other cities in Washington that year hosting their own marches were Spokane, Wenatchee, Walla Walla, Bellingham and other locations. Read more about the march and how a retired lawyer in Hawaii was responsible, almost unwittingly, for getting millions of people off their seats and marching to the same beat in an effort to combat racism, sexism and hatred.