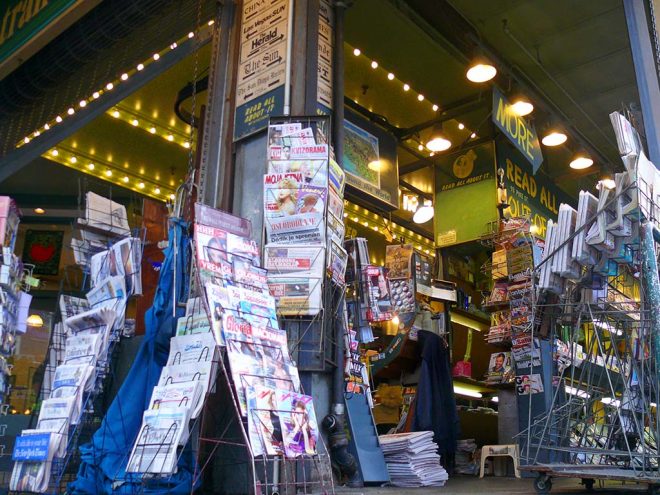 My latest story for HistoryLink is about First and Pike News, a treasured newsstand located at…well…First and Pike, at one of the major access points to Pike Place Market. The newsstand was originally called Read All About It.

When owner Lee Lauckhart opened the business in 1979, his opening night party made a splash in the local papers, undoubtedly helped along by the searchlights he rented to sweep the night skies. Seven months later, Mount St. Helen’s erupted, giving the fledgling business another boost since everyone wanted to “read all about it!”

At one point, the newsstand carried 180 newspapers and some 2,000 magazines. You could find just about every topic. There were four magazines on model trains and four on wristwatches. There were periodicals on needlework, beekeeping and shotguns. If English was not your native language, not a problem: First and Pike News had you covered.

The business closed on New Year’s Eve 2019, its demise mirroring the dramatic decline of the newspaper industry and the public’s increasing reliance on the internet for its news and entertainment. A sad day for news junkies of the Pacific Northwest! Read the entire story here.