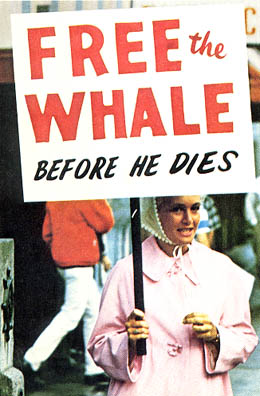 Posted on March 31, 2021 by Rita Cipalla Posted in State history

In 1995,  Washington Secretary of State Ralph Munro and Governor  Mike Lowry began a campaign to rescue an orca called Lolita. Lolita had been captured as a baby off Whidbey Island and had spent essentially her entire life in captivity at the Miami Seaquarium.

On a bluff overlooking Puget Sound, the two officials held a press conference, calling on the Seaquarium to release Lolita and return her to her home state. Their efforts were assisted by those of media mogul Jerry Powers, publisher of a Florida magazine called Ocean Drive. Powers was willing to lease billboards and 100 bus benches around Miami to encourage tourists to boycott the marine park where Lolita was on display.

Inspired by the popular 1993 film “Free Willy,” Munro and Lowry called their campaign Free Lolita! The men wanted to raise visibility as well as funds to bring Lolita back to the Northwest, and even hoped an IMAX movie might be in the offing.

Unfortunately that never happened. Lolita continues to live out her days in Florida — more than 50 years after her capture. Read more about Lolita and environmental advocate Ralph Munro in my stories on HistoryLink.